skip to main | skip to sidebar

As a promo for the Ephemera Group Show at the Philadelphia Library Company in Center City Philadelphia we creative participants were asked to create our own silhouette. 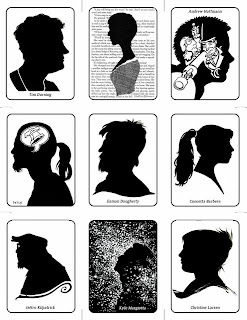 Slow down a moment in your day and play in your imagination.
Be entertained by your own unique bright ideas.
Create a glowing trail of your own creations.

Interpretation of a Silhouette

The pencil sketch is my interpretation of the unknown young woman who posed for the silhouette on the left. The silhouette was created by an unknown person during the 1800's. 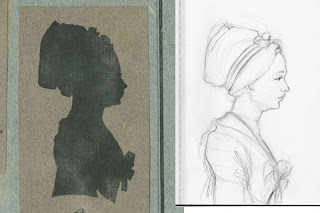 Finished drawings of this silhouette will be on display at the Library Company of Philadelphia this September in support of the current Ephemera Exhibit. More information about the exhibit coming soon!
Posted by Unknown at 7:00 AM No comments:

Finally, the painting is at a stage worthy of a detail shot. Unfortunately, the gloss of the oil paint did not cooperate with my camera. Regardless, the glow effect in the painting that I am pursuing is coming along. 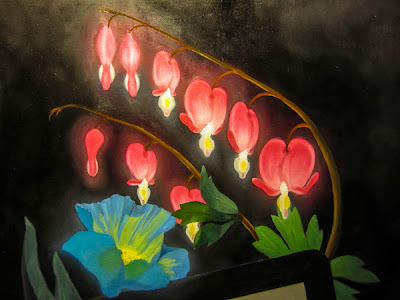 Posted by Unknown at 3:07 PM No comments:

The painting is going through several subtle changes as I continue to study the flowers and it's leaves. One can see the unique evolution, specifically the wing-like thingees, the bleeding heart flowers (the pink flowers) goes though as they blossom.

A lot of calculation were made to create a properly scaled digital tablet. I am surprised how close to square it is.

.
To my good fortune, I have a few bleeding heart flowers growing in my yard. I plucked and studied a stem of leaves and discovered how poorly I interpreted my photo reference. I don't have access to any poppy flowers, but I can tell you that I discovered big differences in leaf type between the different poppy species.
Posted by Unknown at 4:16 PM 1 comment:

In Progress - Blocking in the color 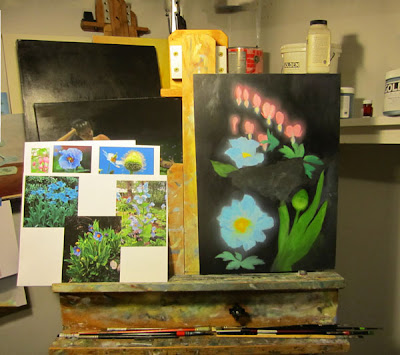 Posted by Unknown at 8:53 PM No comments:

A sneak peek at one of my submissions to be completed for the Group show in conjunction to the current Library Company of Philadelphia exhibition. 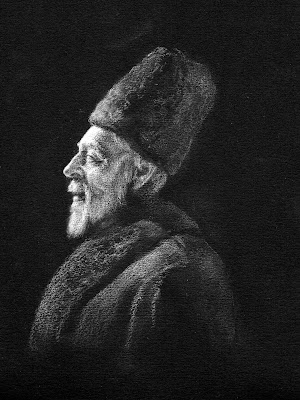 More information here: Library Company Blog
Plus, a painting inspired by this Printing promo has just been started. More to come!

Commit with a Friend

There are moments in life when it becomes challenging to make time to create purely for one's self. Therefore, I embraced the opportunity to tutor a former student of mine, (now friend) , Zach Woomer, on how to paint in oil paints. We commit 2 hours out of our busy schedule to meet and paint. 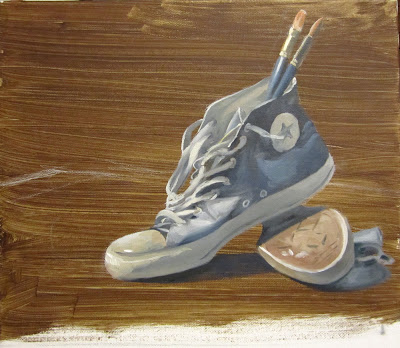 For this still life painting, I gave Zach the opportunity to pick the items to paint. Despite initially being irritated by his ambitious choice of laced sneakers for a 2 hour painting, I surprised myself with what I achieved. Words of advice: "Embrace every challenge. The byproduct offers confidence."
Thanks Zach.
Posted by Unknown at 12:01 PM No comments: 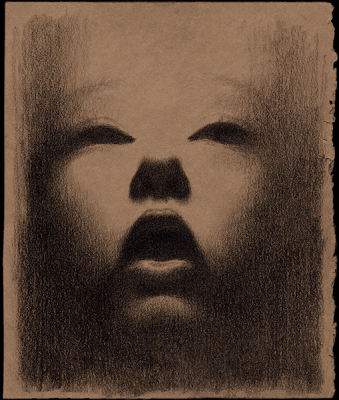 A friend of mine recently started working at a office supply/art store. He has been meeting a lot of the local artist and has been gleefully exchanging creative tips and enthusiasm. Generously, he gave me a sample of this high end paper he was informed about called Stonehenge. The paper is very smooth with minimal pitting, but grabs pencil wonderfully! Thanks Grimmer.
Posted by Unknown at 8:44 AM No comments: 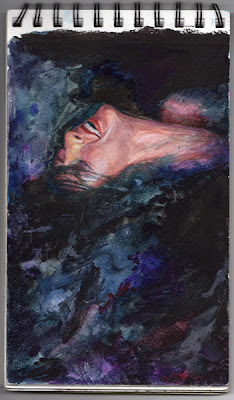 Every moment of light and dark is a miracle. 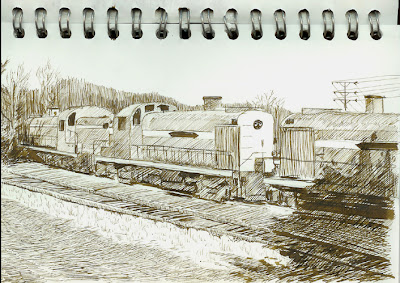 Ever since childhood trains have always fascinated me.
Still as an adult I will pull over to watch the trains go by. 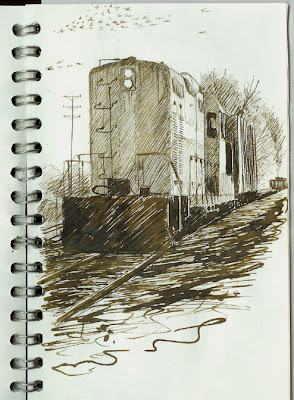 A train moving along the tracks in Brandywine, PA 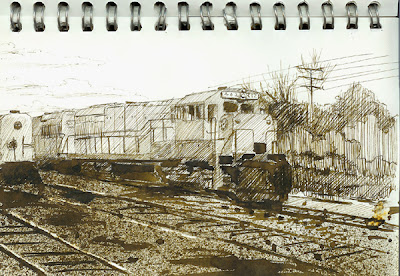 I was trying to use every means of applying ink to this drawing.
You can see the use of a pen, brush and the use of a toothbrush to splatter.
I used a razor blade to scrap out the train tracks.

Posted by Unknown at 7:37 AM No comments: 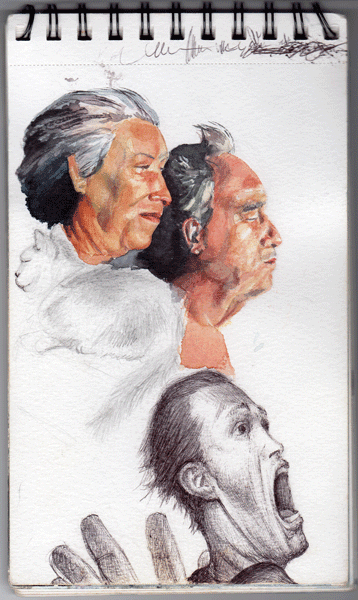 Posted by Unknown at 9:34 AM No comments:

Posted by Unknown at 9:55 PM No comments: 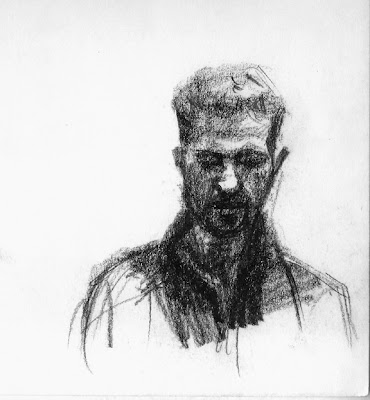 This is what I looked like when I felt ill. 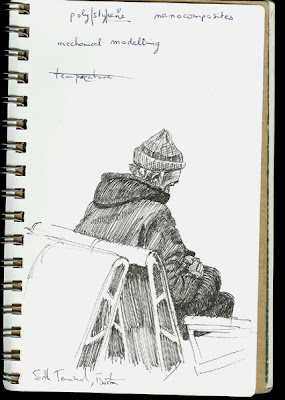 Back in 2004, I was in the Boston Terminal waiting for a bus to take me up to Boothbay, Maine. I left from Philadelphia at 11:00 PM the night before and got into Boston at 8:00 AM. My bus to Maine was not until 2:00 PM. This was a long trip. I had two suitcases and limited funds, so exploring Boston to pass the time was not an option. I was miserable, down on my luck and bored. But, as miserable as I was, I did feel fortunate that I was safe and warm inside from the blistering wind and below zero temperature outside. So, I sat on a bench in front of the staircase leading down to the trains and watched people come and go. To my right was this hobo resting in the warmth of the building, not bothering or begging anyone for a little change. He looked weathered, tired and probably had it a lot worse than I did. There was a sad beauty in this moment of solitude. It was a good thing I drew this sketch quickly, for at 9:00 AM security walked around and kicked him and anyone else out the building who didn’t have a train or bus ticket.
Posted by Unknown at 12:10 PM No comments: 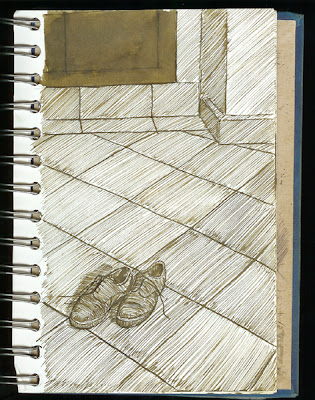 While I was living in Spain, in 1998, I put myself on a very strict budget. Not because I was poor, but because I just wanted to see how good of a life I could have spending the minimum. I made many interesting friends in Spain and we were not interested in spending lavishly. So there I was walking everywhere I wanted to go. Just using the few clothes, art supplies, and my one pair of shoes I brought from the US.
Well, two weeks before I was to return to the US, the front-bottom of my shoes had separated from the top leather, exposing my toes and making a slapping sound every time I took a step. I should have gotten a new pair of shoes. I had more than enough money saved. But I was in such a “budget” mindset that I refused and simply brought some shoe-goo and glued it up as best as I could. I retired the shoes when I returned the US. They served me well. I still couldn’t throw them away. They are safely stored away.
Posted by Unknown at 9:23 PM 2 comments: 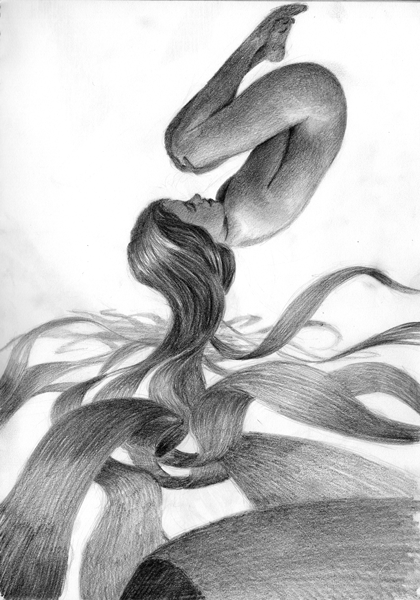 Posted by Unknown at 5:03 PM No comments: